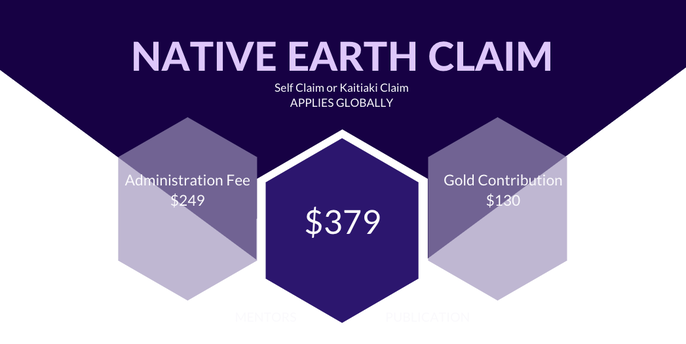 A Native Earth Claim (Mana o te Whenua Authenticatus) is vesting your interest SELF CLAIM or applying to be the KAITIAKI [guardian] of an area of earth (land/soil/earth & air-space), done in every single universe, in now-space, all-time, future-time, past-time & heaven on earth realms.
The Native Earth SELF CLAIM is a earth mass is specific to the certificate of title area or
The Native Earth KAITIAKI CLAIM which is a circular area of earth, minimum 1000 metres in diameter of earth mass.

Making a Claim: Only a Living Claimant can make a Native Earth Claim once they have returned to the land with a Live Life Claim that has been published and active. It applies to all of live life claimants irrespective of colour, race, nationally, creed, sect, religion or gender, but not persons or corporations.

Self Claim to Protect your Asset: Your Native Earth SELF CLAIM is a Native Earth Claim placed on the earth claim that is directly connected to your Certificate of Title. If you have opted for the Self Claim your role on your earth claim is to protect the earth and sacred sites. You can hold this Native Earth Claim and do nothing else. The self claim purpose is to secure your investment and house on the earth, free from the clutches of corporations selling your assets without your consent due to their national debt obligations.

Your Role as a Kaitiaki: A kaitiaki no only protects their immediate earth claim but also initiates Private Treaties over the claim area. Your role is to speak with individuals who have a certificate/land of title and share with them the many benefits of a Private Treaty under their title, under their property/asset/house, that is not part of their certificate of title. Your role is to create relationships with people in your area and protect the earth area and sacred sites. Endorsement: Once we have received your native earth claim and discussed your intention, you will be endorsed to action private treaties in your native earth claim area. Your endorsement will be perfected once it carries the Crown Seal from the Nation where your claim is situated.

Native Earth Claim of Right: Your claim of right will be activated by you with document templates for you to use to inform tenants of your role as a Kaitiaki and the Private Treaty with a Native. Your rights to the earth claim can be verified through heritage, lineage (ancestor), treaty, decree, letters patent and the legal tender of 1 gram minted gold (contribution) which gives your claim superiority over any certificate of title with fiat currency.

Your Intention: Your intention is to stand in your private capacity as a living man or woman and protect your native earth claim.

Claim Location: No matter where you live, whether you rent or have purchased a certificate of title, you can apply for the native earth claim or native earth self claim under your feet as it has not been claimed. Only a living man or woman can make a claim, not corporations acting as countries/nations. We can attach you to your location via a global crown nation such as Aotearoha 'land of Love' or Gondwana (Global) or Kanata [Canada] which are all the indigenous native tribes. Moving location: A Live Life Claimant that moves from their claim looses the right to that claim unless the claimant has vested it to another live life claimant. The live life claimant can make a new claim on new earth. Administration fee applies.

Claim Application Fee: The administration & Native Earth Claim Fee is $249.99 plus 99.99% bullion gold exchange contribution (gift) $130 (includes postage). We will purchase the gold for you with evidence of a receipt and certificate of authentication from a reputable gold supplier and add this to your Native Earth Claim. The Gold Gift will be gifted to the Crown Nation in exchange for the Native Earth Claim Rights.

Revocation of Native Earth Claim: A Native Earth Claim can be revoked if a Live Life Claimant has not activated the native earth claim within 12 months with a private treaty or brings disrespect to the Suv'eran Crown Nations, Leaders, Principals or commits crimes against humanity.

Language: In the event that the english language is in dispute, the native language of the Crown Nation will prevail.
​
Certificate of Titles Null & Void (not on the earth): A Corporate Certificate of Title (air above soil claim) is a piece of paper, who's jurisdiction is the four corners of the construct of paper, the air above the earth and the asset on the earth. It is a fraudulent land title administered by dead entity corporates that do not have treaty to the earth. A certificate of title is not the earth or soil (native earth claim). Governments are corporations. Corporations cannot own land. These certificates of title are null and void. Your asset is at risk. Protection is with the Natives and a Private Treaty. This is not a government process. This is a sovereign process with the native tribal Kaitiaki (guardians).

Approval Process: Once the claim is verified, you will receive your Native Earth Claim Authenticatus in the post. It will be notarised and sealed by a private notary. Depending on the postal services and your international location, it can take up to three weeks for the delivery of your claim documents.  You will receive a tracking number so you can watch the postage process.

Native Claim Status: Native Districts Regulations Act 1858 Section 11 - half castes of mixed race of the pacific are deemed native race. The Mauri Chiefs of the Crown of the Mauri Nation had a treaty 'Te Tiriti o Waitangi 1840' with the Crown of England in the Commonwealth. Thus means everyone in the commonwealth is Native and can claim Native Earth Title if they return to the land.  Verified in the Cestui Que Vie Act 1666. Quote "The state (London) took custody of everybody and their property into a trust. The state became the trustee/husband holding all titles to the people and property, until a living man/woman comes back to reclaim those titles, he/she can also claim damages. Cestui Que Vie Act 1666

Publication of your Native Earth Claim: Go to Link: nativeearthclaim